From the very first sentences of Matthew Lassiter’s 2006 book The Silent Majority: Suburban Politics in the Sunbelt South, I recognized my own life. I was in school during the disgruntling efforts to integrate the post-movement South, and I had no idea, when I began kindergarten in 1979, that Alabama’s schools and teachers’ unions had once been segregated by race. It wasn’t until my teenage years in the  late ’80s that I was beginning to understand what had occurred.  So, I found myself in familiar territory with Lassiter’s opening example: a man in Charlotte, North Carolina who was upset about a plan to bus children to cross-town schools in 1970. Though I didn’t live anywhere near Charlotte and though my school years wouldn’t begin for nearly a decade, I knew people like him, and I knew the situation he was criticizing, since those same fights – integration, busing, compliance – were still going strong ten years later. It was helpful to be reading Lassiter’s explanations about why.

I also grew up hearing this phrase “the silent majority,” but didn’t really understand what it meant. The adults I was around – the twittering moms, plaintive dads, and chatty neighbors – were anything but silent. They talked constantly about what they saw, thought, and believed. It was usually vague, seldom positive, and never affirmative. Their descriptions of the world’s changing modes and mores almost always involved chagrin and displeasure, and were sometimes accompanied by foreboding notions about a future that would be even worse. As a GenXer who grew up in a lower middle-class white suburb and who attended a thoroughly integrated elementary school, I’ve long had questions about what I heard and what I saw back then. I felt as I began reading that the door was about to be cracked and some light let in. 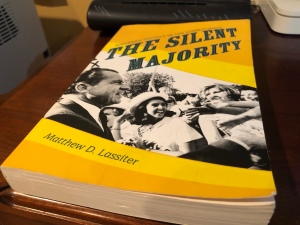 In the “Introduction” to The Silent Majority, Matthew Lassiter writes first about the changes in Southern culture from the post-World War II era to the 1970s. Some people assume that the Civil Rights movement of the 1960s just – poof! – changed things, but that narrative lacks context and complexity. Within the longer term, population shifts away from single-family farms and into towns meant that power also shifted from rural to urban areas. The longstanding Democratic Party had been an organization with a rural power base, which was shaken by urbanization. Within that urbanization, suburbs – some white-collar, some blue-collar – became a part of American life in the South, just as they did in other parts of the country. Due to that shift, the New Deal-style Democratic Party was slowly supplanted by a pro-business, pro-individual rights Republican Party that appealed to less isolated, more prosperous, more educated, urban-dwelling whites. The more affluent among them would soon use their money and social status to become local and state politicians. So, the movement was more like the big knockout punch after a long series of jabs. The machine politics of the South waned, giving way to a new kind of affluent businessman-politician, the kind we still see in the South today.

Why does this matter? Lassiter writes in the early chapters about how these were the folks who had a heavy hand in shaping the next phase in the South, which began around 1970. This more-educated, typically affluent civic leader saw politics like he saw business: it’s all about shaping the circumstances, and the ultimate goal is achieving the sought-after results. Where the Democratic Party could rely on “Vote for us because you always have,” these new leaders were more inclined to say, “You don’t like what’s happening? Vote for us because we will produce results you will like.” Lassiter writes in chapter one about the scenario that opened the door for them:

Massive resistance ultimately exposed the myopic vision of the rural leadership of the white South and transformed quotidian middle-class concerns about educational quality into grassroots political mobilization against Black Belt recklessness. But, out of intimidation or political impotence, distraction, or disbelief, few white moderates organized in protest until after their own communities an immediate choice between legal compliance and public disorder, between maintaining total segregation and preserving public education.

Because much attention is focused today on marches, now-famous leaders, and other aspects of the movement that fit easily into TV sound bites, textbook side bars, and interpretive center displays, many people are unaware that Southern segregationists considered and even proposed the total elimination of public schools as an anti-integration measure. Lassiter’s adjective for their vision – “myopic” – seems very kind. Though many Southerners opposed total closure, most didn’t have the political wherewithal or social capital to oppose it. But wealthy urban businessmen (and their wives) did, and they stepped in with voices of moderation when everybody’s backs were against the wall. (I say everybody because all Southerners, black and white, would have been facing real problems, had public education been completely eliminated.)

Another underlying factor, though, is important too: these well-to-do, nouveau riche folks typically take care of themselves first and often leave others – lower-income whites and people of color – flapping in the wind. Lassiter explains early on how federal interstates enabled the creation of wealthy “outer-ring” suburbs around cities like Charlotte and Atlanta – his two examples in the book – where families with enough money could escape the turmoil created by the movement and could forge a financially based place of de facto segregation. Our neighborhoods isn’t segregated . . . it’s just that most people can’t afford to live here. These new suburbanites also viewed themselves as self-made, self-reliant, and self-sufficient, despite having their lifestyles undergirded by government-funded roads, infrastructure, and housing policy. And this core belief led to a point-of-view that welfare and busing programs were “handouts,” while they themselves received no such benefits.

Yet, despite the effort to distance themselves, the facts of post-movement Southern life did land on their doorsteps. By the late 1960s, integration became inevitable, most significantly school integration, and these business-minded people were faced with the near-certainty of federal intervention in daily life. After fifteen years of stalling that began with the Brown decision, rulings like Alexander v. Holmes and Swann v Charlotte-Mecklenburg declared that it was time to get it done. Lassiter explains that this acceleration led to a “neighborhood schools” movement driven by grassroots politics based in the suburbs. You might be about to bus kids . . . but you’re not busing my kids, the white voices of “color blind individualism” declared. They had left working-class and poor whites in the city center to face school integration, but they found that they couldn’t avoid it entirely. So, they had to respond.

Before I write much more, I want to acknowledge that The Silent Majority is a fairly hefty book – over three hundred pages of text with a large-format time size and relatively small font – so I can’t possibly summarize Lassiter’s entire argument in a couple-hundred words. But .  .  . what I do want to note are four keys points: 1.) that “good faith gradualism” had failed, 2.) that the idea he calls  “color blind individualism” had affluent whites feeling that what they had earned was being taken from them, 3.) that public schools had become the battleground where true integration would be established (or not), and 4.) that politics in the South in the 1970s and 1980s would be permanently altered by these grassroots efforts that emerged from the suburbs. If there were a fifth thing it would be: that whites’ locally created, supposedly race-neutral political outlook had a significant effects on national politics, particularly Republican politics, which were seized upon by politicians like Richard Nixon and Ronald Reagan.

These battles over court-ordered integration, writes Lassiter, defined or at least ossified  some core beliefs and narratives among post-Civil Rights white Southerners. Using Charlotte and Atlanta as his examples, he describes the “rapid expansion of outer-ring suburbs” that came from the “farm-to-subdivision transition of the 1960s” and how they were a “fusion of pragmatism and progressivism.” Writing of the “Color Blind Crusade”, Lassiter includes this:

The most common refrain from suburban correspondents [to the Charlotte Observer] remained the defense of freedom of choice attend neighborhood schools, expressed in the prevailing language of middle class meritocracy and color blind innocence. In the race-neutral rhetoric of “quality education,” many opponents warned that busing would mean higher taxes, longer traffic jams, disrupted family schedules, and declining popular support for public schools.

The prevailing message said that these suburban Southern whites were looking beyond race and Civil Rights, which could be perceived as progressive, to doing what made sense for the community, which could be regarded as pragmatic. Makes sense, right?

I remember, in the ’80s, hearing “color blind” proclamations about how it wasn’t race that was driving the opposition to public policy proposals. I also remember pronouncements about getting to keep what one had earned, which included the neighborhood and its school, and how it wasn’t fair to have those things taken away. Of course, anti-federal government sentiment was already strong among white Southerners, so these particular sentiments had a general foundation already. In the 1860s, the federal government had dismantled slavery, then in the 1950s and ’60s, the feds dismantled Jim Crow. In the decades that followed, what we today call “systemic racism” or “institutional racism” was the target.

Though the book was published fourteen years ago, in 2006, it has been interesting to read The Silent Majority in 2021 when the nation is grappling with these notions of systemic racism. Today, I hear some white Southerners say there’s no such thing, that everyone has equal chances, that some people just don’t seize on opportunities, that some people don’t care to live any better than they do— all of which have roots in what Lassiter describes as a response to integration. As the editor of a project about beliefs, myths, and narratives in Southern culture since 1970, I was intrigued by this argument about how the narratives, which I heard articulated, were created and how they evolved.

Toward the end of the book, Lassiter is writing about some of the same things that Alexander P. Lamis did in The Two-Party South. This type of local politics melded nicely into a national framework, which worked for coalition building. In the 1970s and ’80s, the Republican Party became competitive in the South through a mixture of social and political factors, and Southern culture changed immensely. By the 1990s, the results, which we still see today, had emerged: a Republican-dominated region whose foundation is social conservatism, anti-federal government, and a general refusal to acknowledge social problems as having deeper root causes— “color-blind individualism.” This belief affects public schools, public services, public transportation, public health, anything that requires the cooperation of citizens to be organized for the common good. Its resulting narrative also negates any complaints about what isn’t fair, what isn’t equitable, or what isn’t effective: income inequality, systemic racism, mass incarceration. Nope, you did it to yourself, say the color-blind individualists, so live with the consequences. Thus, what began as a modus operandi for maintaining neighborhood schools in affluent suburbs expanded into a pithy kind of morality based on notions of bootstrapping and personal responsibility.

One thought on “Reading Matthew Lassiter’s “The Silent Majority””

This site uses Akismet to reduce spam. Learn how your comment data is processed.